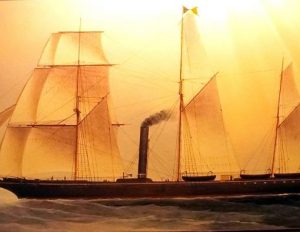 Ireland is a country that is no stranger to war, famine and disease. However, the Great Famine in the years from 1845 to 1849 is the worst in their recorded history.

The potato, originally from South America and introduced to Ireland, so they say, by Sir Walter Raleigh in the late 1500's. The potato and Ireland go hand in hand to us, and so it was to the Irish by the 1840s. It grew well and plentiful in the soil, and was the staple diet for over half the population.

Unfortunately, it was highly susceptible to a fungal disease commonly called blight that destroys the potato itself, while the plant still looks healthy. The first warning you get that something is wrong is when you dig for the potato, expecting it to be ready to eat. Blight spread from America to Europe in 1842, arriving in Ireland in 1845 in near perfect conditions for it to prosper. Talk of the disease occurring elsewhere naturally caused concern in Ireland before 1845, but nothing prepared the Irish for what would happen as it took hold and destroyed the crop on which so many depended. Not only does the blight destroy the current crop, it stays in the soil to destroy subsequent crops as well, so 1845 was just the beginning.

Irish and absentee British land owners exported much of their other crops to England and the practice continued in spite of so much local hardship during the years of the famine. There was much local sympathy amongst the wealthy for the poor people most affected by the famine, but they, too suffered financial constraints and tenants were ejected from their land to fend for themselves. Many of these went to the big cities in search of food or work, and overcrowding lead to the outbreak of diseases like typhus and cholera. As in many such situations, people who could help were divided amongst those who did so willingly, and those who thought it a population correction.

The peasants were faced with an awful choice. Stay in the country and starve, go to the city and die of disease.

One alternative was to emigrate and the Irish did so in droves through government and private assistance programs. Countries like America, Canada and Australia welcomed the emigrants.

It's estimated that between 1845 and 1849, one million Irish died and a further two million emigrated.

Our story is that of William and his family, all of whom have survived the famine. They were lucky to be tenants on land where the land holder cared for his tenants and behaved accordingly. However, William's father wants his son to have a better life and pushes him out into the world. Like many Irish, he has heard stories of those who found better lives by going to new countries, unfettered by old rules and regulations.

William goes to Australia on a steam ship. The use of steam for propulsion wasn't new, but the technology to harness it to cross the oceans of the world was certainly in its infancy.

Ocean travel had been traditionally done under sail and those ships had grown bigger and bigger to transport more people and larger cargoes. The desire for speedy crossings led to the parallel development of the Clipper Ships whose hey-day was probably around the 1850s, before they were pushed out of the way be steam. Steam allowed for both size and speed, so passengers and freighters no longer had to make a choice between a fast Clipper and a slow, bulky square rig. All wishes could be accommodated by steam. Nonetheless, nothing happened overnight and ships of many varieties plied the many waterways of the world at the same time.

The Lady Grace is based on Brunel's SS Great Britain, wonderfully persevered and available for viewing at Bristol. When launched in 1843, she was the largest ship in the world and was the first iron-hulled, propeller-driven, ocean-going vessel. However, the behaviour of the crew, the captain and the events on the Lady Grace's voyage is pure fiction. Having written that, the dangers outlined in the story were ever-present and many ships that set out for Australia not only didn't reach it, they were never heard from again. Their fate can only be presumed. Sailing was the only way to get to Australia and it wasn't a journey for the faint of heart. There were a number of books available at the time to advise the traveller on what to take and what to expect. I doubt that any advice would be adequate to prepare a person for ocean travel at that time. Successful and experienced captains were popular and much sought after to better one's chance of reaching a destination.

For many years, steam ships had both sail and steam. One purpose was that if you ran out of coal, or the engine broke, you could always sail. Another was that you could carry only so much coal, so if the wind was right, you could dispense with the steam, use the sails and conserve the coal.

The SS Great Britain was square rigged, as is the Lady Grace. It was the only practical rigging at the time for a large ship. As you could imagine, being the largest ship afloat, the sails were huge, adding great danger for the crew in their usage.

Early voyages to Australia experienced death from disease and hardship both among the crew and passengers. Not much was done to for the comfort of either. As far as the passengers go, steerage certainly had the worst of it and first class - where available - the best. As time went on, conditions improved for the passengers as competition increased, but it was the late 1800's before much thought was given to the conditions for the crew.

Most sailors and passengers couldn't swim, so when disaster was inevitable, most prepared to meet their Maker. Of course, if the ship was threatened by a storm or a crash with land, swimming wouldn't have been all that helpful.

William's experience would not have been unusual for the time. Work place safety was a dream at best. Most men made the best of what was on offer and got on with the job.