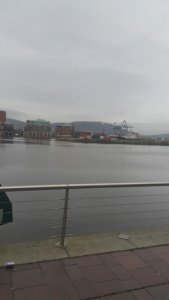 Wiliiam gives his origin as Belfast on his marriage certificate and Ireland on all his children's birth certificates except for the last two where he again states Belfast, Ireland.

I spent two weeks at the Public Records of Northern Ireland (PRONI) in Belfast in the Irish winter of 2013. I stayed in an apartment very nearby and went to the office whenever it was open. Searching the records is a daunting task. The records are all on microfilm and you request what you want to see. Many of the records were destroyed years ago by fire and also when the government ran out of space to store them, so it's a hit and miss exercise. The only information I had for William from his marriage certificate was as follows:

There was no indication of his age - that space was blank. Incidentally, both William and Caroline signed the certificate with 'his mark' and 'her mark' respectively, indicating that neither of them could write.

It may come as a surprise to you to be told that Stewart is a very, very popular name in Ireland. The records on the Stewarts are extensive, so it's a difficult name to trace. There are so many of them. Also, the records are gathered by church and by religion. I could only guess that William was protestant. Nevertheless, I decided Stephenson was not as popular, so it made more sense to search for Margaret. There was one wrinkle, as I searched I found Stephenson and Stevenson. Research in Australia showed me that spellings on any document can't be trusted, so I searched for both spellings.

I don't remember when I found what, but I used all of the two weeks.

I found Margaret spelled as Stevenson and born in Antrim.

You are bound to wonder why I chose this one? Actually, there weren't many and the age was about right.

I focused on Antrim.

Things became a little easier. I was now focused on Antrim, and I knew the spelling of Margaret's surname. Having written that, note the spelling is both Stephenson and Stevenson on the records.

Perhaps Mary was named for Margaret's mother; James for his father; but, Isabella? Where did that come from?

I never, ever found anything on William.

The places of birth for the children are interesting:

Hurtletoot and Hungryhall are townlands both near the village of Antrim in County Antrim, about an hour west of Belfast by train.

So, I hopped on the train in Belfast and went to Antrim. A most enjoyable journey. Pretty country and Antrim is a very pretty town. The townlands are rural and occupied by farms and houses.

I'm confident that I found William's family, but I was very disappointed to find nothing about William. I spoke with one of the people at PRONI. He said there are many reasons for failing to find anything, but that doesn't mean nothing exists. The great famine went from 1845 to 1852, pretty much covering the period over which William's siblings were born. William may have been born somewhere else and the family moved back to Antrim to be with family in that period. As I note elsewhere, he says Belfast on three of his children's birth certificates, so that's a likely possiblility. It's also possible that I have the wrong family! Wouldn't that be awful?