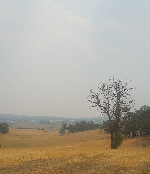 I used the insolvency records to find out more about William.

They led me to question "why did William become a farmer in the first place"? Indeed, how do I even know he was a farmer? Wasn't he all about the gold?

How do we know it's our William? After all, he's called Thomas! He is mostly called Thomas on his children's birth certificates, and when not, he's William Thomas. He is called William Thomas on three occasions, being the births of John, Thomas and Ethel. Not quite the first and last, but not far from it. Besides, too many other pointers help us to be sure that he was a farmer. For example, on his marriage certificate, he's a farmer. Note also that his situation ie King's Plains is the decision of the electoral officer and indeed that's where Caroline said Margaret was born in 1870.

Becoming a farmer may have been as I describe it in Beyond the Mountains. It might also be that it was easy. He came from a farming area in Ireland, so the business of farming would not be new to him. He turns his hand to a number of things as time goes on. Perhaps farming was just one of those things.

One of the intriguing things about William Thomas Stewart was the location of his farm at "Chain of Ponds", west of Bathurst.

Why "Chain of Ponds"?

A clue to the location came when I discovered that William had become insolvent in 1881. I obtained the docments related to the insolvency.

One of the line items on his statement of affairs regarding his creditors was:

James Backhouse died on 5 August 1883 aged 67 at his residence in Bathurst. His will states that he had two farms:

I went looking for the two farms.

One (the 42 acres) was easy. It was sold by Mary Backhouse (daughter of James) to George McDougal on 3 June 1887. It clearly describes a block on the Millthorpe-Vittoria road. In James Backhouse's day, the Millthorpe-Vittoria road was called Pretty Plains Road and it went all the way from the Orange Rd (now Mitchell Highway), not far past Vittoria, to West Guyong, back on the Orange Rd. These days, Pretty Plains Rd is only the part that joins the Mitchell Highway west of Guyong and Vittoria Rd, a few k's short of Millthorpe. The block described in the sale is on the right hand side of the road from Vittoria, about 3ks from the Mitchell Highway. 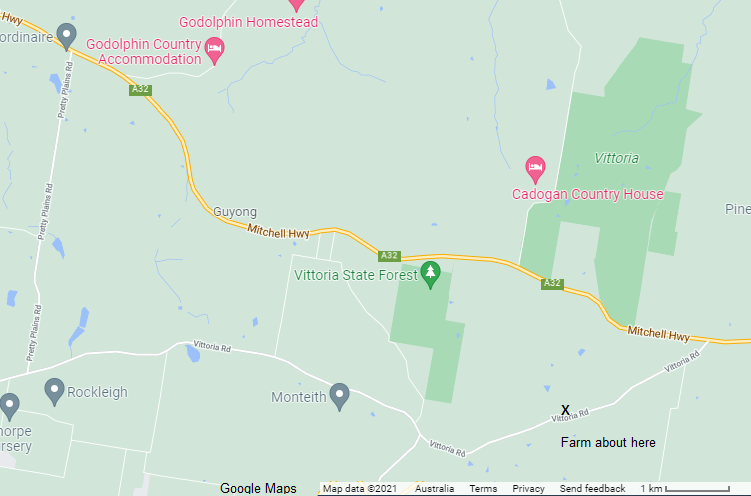 The other farm was much, much harder to find. However, Mary Backhouse sold a total of 40 acres in ten parcels to John Frape on 26 January 1906. The title is an extensive document and very hard to read. Nonetheless, the total of 40 acres is in related and contiguous blocks in the village reserve of Guyong. Guyong was a great plan in its day, but didn't ever come to much. Clearly, James Backhouse thought it a good investment.

Which farm was occupied by William?

It's my guess - and I hope a good one - that it's the 42 acres on Vittoria Rd and the following are my reasons to substantiate that guess.

All in all, I'm convinced that the property initially settled by William and Caroline was the 42 acre block on the Millthorpe-Vittoria Road 3.09 km from the intersection of the Mitchell Highway with that same road, owned at one point by James Backhouse of Bathurst. William was occupying this farm in 1881 when he became insolvent and then moved to Kelly's Station outside Newbridge on the Caloola Rd. 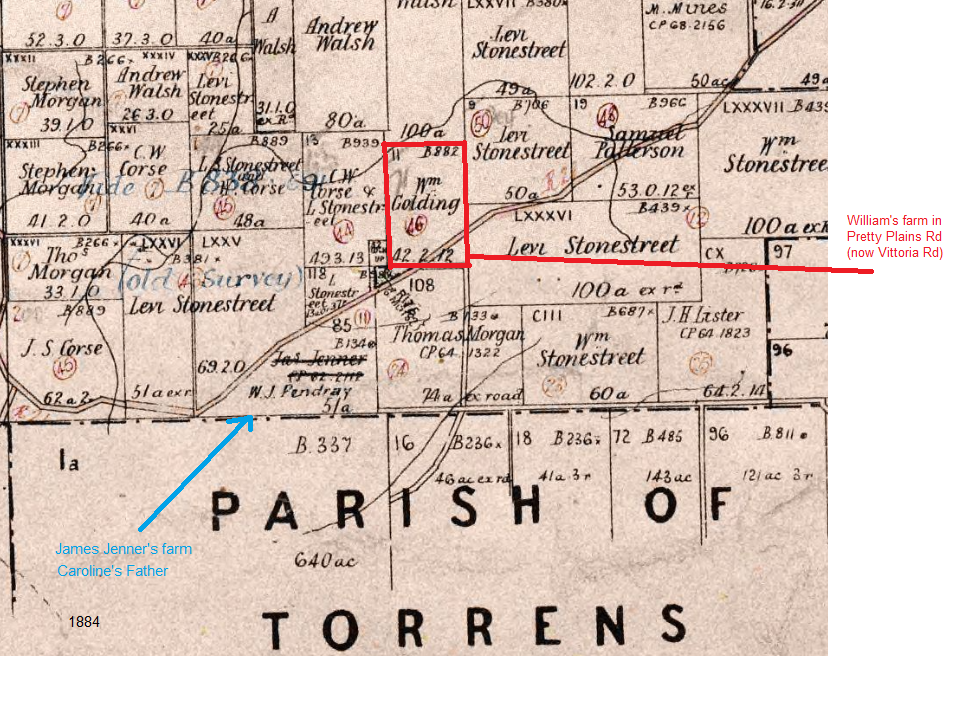 Parish Map 1884 showing the properties on the Millthorpe-Vittoria Rd. James Backhouse's property is named for "Golding", but the property was too well discribed by Mary Backhouse to be any other property than James'. William may have initially rented it from Golding before James acquired it. My guess is that Thomas was there from around the time of his marriage in 1864 to the time of his insolvency in 1881.

It's also interesting to reflect on why William and Caroline settled in Pretty Plains Rd. It might be as I describe in Beyond the Mountains, or it might be that he met Caroline's father who owned a property on the other side of Pretty Plains Rd and through him, Caroline.

This is the Parish map adjoining just to the right of the previous one, above.

Parish of Colville (previous) adjoining this one, Parish of Vittoria.

As with Guyong, the village of Vittoria had great plans, but nothing came of them. See the land for Thomas Old on the Pretty Plains Rd (from Orange on the map), short of the Orange Road. Note also the land attributed to William Jenner, James Jenner's son.

Map of James Backhouse's other 40 acres in the Village of Guyong. Note that the properties attributed to James Jeffries (allotments 1, 2, 3 and 4) are described fully in the title deed from Mary Backhouse to John Frape in 1906, as are the six properties ascribed to James Backhouse. The total area of the ten properties is 40 acres. Note also that while the village was laid out as though to exist, the village did not ever grow to much. It's interesting to note that Guyong is Caroline Jenner's birth place on her birth certificate.

The public school is shown. Frank Barr (Meeting the Challange. The History of Public Schools in the Blayney District) doesn't mention the school in his book, but Trove has Miss Alice Stanford teaching there in 1880. D. McDonald was awarded a tender for a weather shed and improvements in 1881. He was paid 55 pounds for the work in 1883.