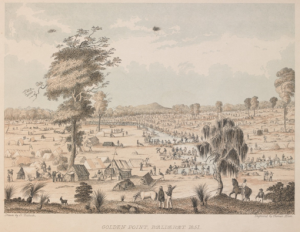 Gold had been found in Australia years before its official acknowledgement. News of early finds had been supressed by the Authorities due to the nation being largely founded as a convict settlement. What would the convicts do if they found gold was there for the taking? Convicts were on loan to free settlers for their labour and their numbers were such that they could easily overwhelm the settler, their overseers and families.

It's no wonder that when news of gold-finds became public knowledge, searching, scrounging and mining became a full time occupation and gold was found in many places almost overnight. Some of it had been found already.

Gold had been rumoured to be in NSW, South Australia and Victoria for a few years preceding the formal announcement that gold had been found in NSW. Some finds were dismissed as hoaxes on the basis that the gold had been brought from California.

There is much controversy around Edward Hargreaves being the first to find gold in Australia. He had lived in NSW for a time before becoming a seasoned gold prospector in California. Nonetheless, history attributes the find to him in April, 1851 in Ophir outside Bathurst. Victoria's Hargreaves was James Esmond who had also been to California and returned to Australia on the same ship as Hargreaves. He thought, like Hargreaves, that the similarities in the country and topography between his home in Australia and California meant that gold was to be found in Australia, too. He found gold in Clunes, Victoria, north of Ballarat, in June, 1851.

The stage was set for Australia's gold rush.

It would be disappointing if there was no controversy over the discovery of gold in late August, 1851 at Golden Point, in Ballarat. Two parties claim the credit, although only days apart. Gold had been found nearby at Buninyong by Thomas Hitchcock in early August, in a group heading for Esmond's discovery at Clunes. As a result, parties were now searching any area that looked promising. What is in no doubt is that the Ballarat discoveries were fabulously rich. Two of the largest gold nuggets ever found are from Victoria and one of those was the Welcome Nugget found at Bakery Hill, in Ballarat in June, 1858.

The Government of the time was quick to establish digging licences and early lucrative finds meant that while the diggers didn't like the fee, they didn't complain too much. They had their hands full maintaining the integrity of their claims, guarding their finds against those who thought little of stealing and trying to live where most everything that was edible, wearable or useable came by wagon from Melbourne or Geelong.

Those who live in Australia and have visited the bush can testify to the tranquil nature of an Australian gully. Overhanging gums, cool, fragrant ferns close to the ground, gentle breezes and the bubbling sound of a creek after rain. Such places had been transformed by the gold rush. Freezing cold in winter, hot, dusty and fly-ridden in summer made tempers short and patience rare. Crowded diggings, fist fights over claim transgressions of no more than an inch, the stink of human and animal waste and the cries of discontent from people who had nothing better to do of a night than gamble and drink whatever booze they could find or afford.

Order came to Ballarat as those that lived off the diggers like shop keepers, hoteliers and bankers, came to the town, created streets and raised buildings of moment. The government also established premises to house police, to issue licences and to govern. Churches too, played their part.

Unlike most gold fields that come when the gold is found and go when gold is finished, Ballarat had an ace up its sleeve to ensure longevity. It had what are called Deep Leads. These are ancient river beds with gold deposits that have been buried under hundreds of feet of earth and rock by volcanic upheavals. Some were found near the surface, alerting the diggers to the opportunity and so digging became more like mining as the diggers followed the leads down into the depths. Ground water was always a problem, as was the definition of claims and the constant threat of tunnel collapse. It didn't deter the diggers who always had the main prize in mind: gold. Fabulous wealth was found in many such Leads. One in particular, the Canadian Lead named after a man called Canadian Swift and coming off the Canadian Gully, had an area known as the Jeweller's Shop due to the concentration of heavy, lumpy, bright gold.

In spite of the wealth abounding, not all the diggers were lucky. Many came with hope and left with despair.

My father used to quote:

"With great intent they went out west to make their fortune speedy,

But they returned without a bean, broken down and seedy."

To add to the despair, the Government continued with its oppressive licensing scheme that demanded payment just to dig. For this and other reasons, the miners united against the Government and the result was the only organised, armed insurrection by a large number of citizens in Australia's history, known as the Eureka Stockade.

There is a wonderful book - one of many I have read. The Forgotten Rebels of Eureka by Clare Wright. I can recommend highly Clare's book for its research and pathos. A wonderful narrative and beautifully told.

Ballarat is today is still a busy, thriving town, showing much evidence of its proud, golden history.